Impacts of City Tourism: An international comparison of management strategies – Part I

The last few months a huge discussion was spreading across Berlin about negative effects of international tourism on the city. “Foreign visitors are being blamed for increasing rents, noisy streets and neighbourhood upheaval“, the Australian-Estonian and Berlin based freelance journalist Joel Alas summarises the reproaches on the so-called “party tourists” in his critical column for the german newspaper “Der Tagesspiegel” (1).

Alas is right, when he points out the difficulties of blaming tourists (or foreigners) for being the main culprit for those for sure undesirable developments within the inner-city neighbourhoods. But it is also fact, that increasing tourism has major impacts on the cities. The last 10 years the number of overnight stays  in Berlin doubled from 11 up to 21 million.  Simultaneously the marketing and the tourism infrastructure expanded significantly. But there are a lot of open questions how to manage the flows of tourists and their impacts, especially at subcentral neighbourhoods. And the  whole discussion about it is not a strictly Berlin-phenomena as the view beyond national borders shows (see 2):

The city with a population of 8.4 million counts about 48.7 million visitors each year, including half a million Germans. Continually, there have been several complaints from residents of apartment buildings, in which single units were rented to continuously changing tenants – as known from inner city areas like Berlin Kreuzberg or Mitte. For solving this conflict, the city decided that private citizens are not allowed to rent rooms to tourists and leases with less than 30 days duration are generally illegal.

“But tourism is not a real problem. Most people know that it is a cornerstone of our economy”, says Heywood explicitly. Conflicts are an exception. Much rather he talks about successful campaigns like “Just Ask The Locals”, which he and his colleagues have recently launched: Tourists should be encouraged to speak directly to New Yorker and ask for tips as well as it should encourage New Yorkers to help seemingly helpless visitors find their way into the city. 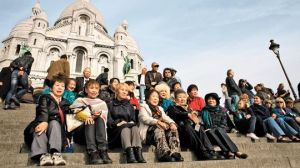 On the banks of the Seine, recently, there are more complaints from residents about the growing traffic problem caused by the mass tourism, says Michel Mari, director of  “Comité Régional du Tourisme Paris Ile-de-France”. The city reacts with building coach parks outside the city center and prohibit parking in front of Notre-Dame. Even most of the banks of the Seine, mainly  frequented by tourists, will be temporarily closed to vehicles.

60 Million people are visiting Paris each year.  Individual conflicts of interests occur in heavily frequented areas. Thus, in hip districts such as the Rive Gauche or the Quartier de Belleville there repeatedly exist  discussions about how to reconcile the interests of night owls and those of other residents. It’s even to younger “party tourists”, but also to many Parisians who make the day to night: “We like to celebrate”, says the tourism advertiser.  Recently, his city had commissioned a study on how to balance the interests. The results will be published shortly.

1 Response to Impacts of City Tourism: An international comparison of management strategies – Part I