Did you know that some years ago the megalopolis São Paulo in Brazil had banned commercial advertising in the city? Since stone-age cave-painting we know, there has always been kind of a natural urge of humanity for signs and symbols in public space. That’s why after the ban in São Paulo graffiti increased exponentially. Nevertheless the city continued to exist and 70 percent of city residents find the ban beneficial . Some times I wish the landscapes of European cities strip too all of its billboards – at least the boring ones. Fortunately, some advertising agencies have discovered more creative modes to utilize urban public space. My first example on how this is done comes from Berlin. 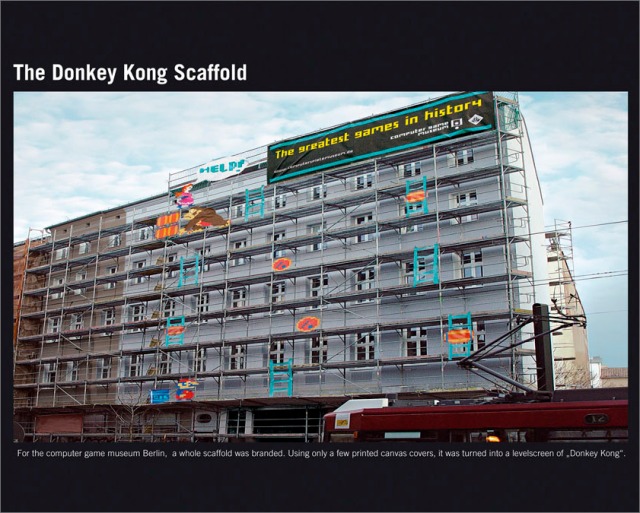 In December 2006, agency Scholz & Friends turned a scaffold-clad apartment block in Berlin into a huge advertisement for the city’s Computer Game Museum . By laying printed canvas covers of various graphic elements from the original Donkey Kong platform game over the scaffold, they made it look like it was a huge screen from the game. During the month the installation was live website traffic increased by 38% above the average monthly hit rate.

Across the big lake, in Toronto Glide dental floss – a product capable of removing any wedged foodstuffs from between teeth – was advertised by Saatchi & Saatchi . The agency created this enormous inflatable pig and had it wedged between two buildings in Toronto in this hugely original and eye-catching campaign.

During the German-hosted 2006 FIFA World Cup, adidas wanted to get across the message that they cooperate with the best football players on the planet. Rather than run a traditional poster campaign, the creatives at TBWA/Berlin decided it would be fare more impressive to create a huge Renaissance-style fresco on the ceiling of the main lobby of Cologne Central Station. Within minutes of the fresco’s unveiling it was featured on national German television and press covered it throughout the World Cup. More than 8.5 million people saw the fresco in the flesh during the course of the tournament.

Another creative idea was developed by Leo Burnett’s agency in Frankfurt for Unicef Deutschland. Circular stickers, with the sticky side camouflaged so they wouldn’t be noticed, were placed, sticky side up, on busy public concourse. As a pedestrian stepped on one of the stickers, so it became stuck to his or her shoe. When removing the sticker, the pedestrian would see the non-sticky side, designed to look like a landmine, which carried the following message: “In many other countries you would now be multilated! Help the victims of landmines.”

Similar to the augmented realities shown in this blog post the Museum of London launched its Streetmuseum app in May 2010. It brings its extensive art and photographic collections to the streets of the UK capital. Streetmuseum was developed with creative agency Brothers and Sisters . It makes use of geotagging and Google Maps to link historical images of London scenes from the museum’s archive to the locations as shown on a map. The really clever thing about this app is that if you are in one of the featured locations, you can click on a 3D view button and the app will recognize where you are and overlay the historical image over the current view through your smartphone’s camera lens.

To encourage people to test drive the Volkswagen Eos convertible, creatives at DDB Düsseldorf came up with the idea of letting the sunshine do the talking. A black poster with the cut-out type was carefully angled so that on sunny days it casts a shadow onto the busy pedestrian area below it, to reveal the text, “Perfect weather for a test drive.” 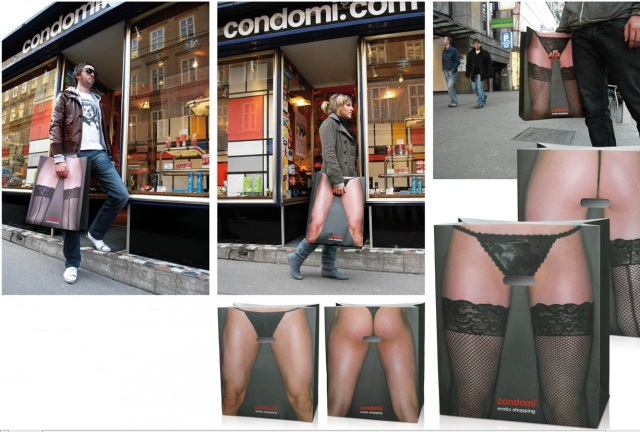 Most of these unconventional types of brand communication I’ve found in the book Guerilla Advertising 2 by Gavin Lucas. All these small examples give me hope that our city landscapes will be used for more adventurous or even interactive types of advertisement. We’ll see. Maybe I find a job in this branch and soon will participate in this guerrilla. Keep your fingers crossed!