The many faces of Athenian identity*

Eri’s fingers type messages on her mobile at the speed of light. She’s arranging to meet with her friends at the square and just hang out. Eri is 16, born and raised in the dense central Athenian neighbourhood of Kypseli. She’s spent her life between the basement, where she was born when her parents came from Albania, and the second floor of an apartment building, where they recently bought a two-room flat. A middle-aged woman passes by and smiles at Eri, asks after her mother and her small sister: “Tell your mother I have made some fresh ‘pita’ and she can come and pick it up tonight”. “My mum took care of the lady’s invalid mother until she died last year”, explains Eri,  “and the lady is still so thankful, she brings us goodies regularly”.  There are children playing around the dry fountain, elderly people nibbling pumpkin seeds (“passatempo”) at the bench while a woman crosses the square to buy a Bulgarian newspaper at the kiosk (“periptero”).

They say Kypseli is a “typical” Athenian neighbourhood. Dominated by the 5 to 7 story blocks of flats (“polykatoikia”), once populated by the Athenian middle classes, it climbs up the Tourkovounia hills on one side, but dives into the roaring city bustle on the other. But exactly what is typically Athenian?  Is there something that is quintessentially, prototypically local, something that could stand as a metaphor for everything else? Is there such a thing as an Athenian identity? Some answers come easily. 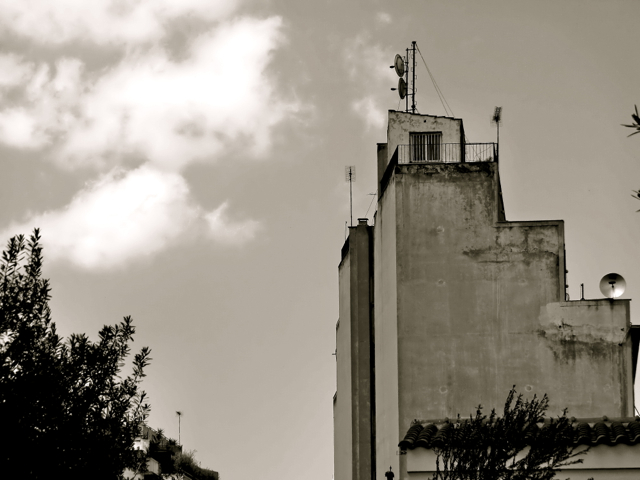 Athens from the air offers a recognizable relief to the trained eye: The mountains that close the city to the north and east; the Saronic gulf with the hazy silhouettes of Salamis and Aigina – the islands – to the west; the hills and rocks, Lykavittos, Acropolis, Tourkovounia – and around them the never ending city, a sea of white pebbles climbing up hills, and plunging down again, glittering under the merciless Attica sun.

Old and new Athenians walk ancient streets around the holy rock of the Acropolis, sit at cafés and sip their overpriced drinks; dusty shops sell herbs, spices and cheap Chinese toys; people squeeze into crammed busses to go to work, stand in endless lines in Kafkaesque civil services. The Philippina housemaid walks the mistress’s dogs in the leafy suburb of Kifissia while the ship whistle blows in the harbour of Piraeus.

Maybe none of the above is unique for Athens. Many of those elements can be found in other places, but what is probably singular is their local blend. Here they intersect; they meet and interact in a distinctive way. This is the stuff places are made of: materials, norms, everyday practices, social relations and conflicts, dreams, fears, symbols, representations. Places are constantly produced through the most complex constellations. Places are open to the future and to constant change: they develop and evolve. New people arrive, with them come new practices and social relations. The old world crumbles daily, but leaves its traces behind. The new one is build with the spolia of the old one, relentlessly reconfigured and reinterpreted, so that the past is also open to the future.

Etymologically, identity simply means “that which is the same to itself” and such a definition probably sounds straightforward enough. Yet, what is “itself” in something so heterogeneous as place and how can anything ever be the same in a world caught up in constant change?

When we talk about place identity we may mean very different things. We may refer to the ways in which people (groups or individuals) identify places, understand and recognize them, as they do other objects, assign to them characteristics and particularities. This is also called place image, when it refers to collective mental representations of a place. Place branding in general terms, aims at improving a place’s image.  A second meaning of place identity may reversely refer to the ways in which people (again both groups and individuals) are recognized in their relations to their place of origin, residence etc. We assign to people characteristics by projecting onto them what we think about the place they come from. If, in an extreme example, a neighbourhood has a ‘criminal’ reputation, we may tend to think of its residents as potentially criminal. A third use of the term place identity follows the phenomenological tradition that seeks to explore the links between the human and the world in which she lives. It is about the ways that people incorporate place into their own identity construction, how they identify with it. The neighbourhood we grew up in, the city we live in, become parts of who we are and how we think of ourselves – as individuals or as social groups.

But usually, place identity is used to denote place uniqueness and distinctiveness; the typical, the local, the characteristic. It is about the sense of place, the consciousness that no two places will ever be the same, no matter how similar they may seem from afar. Yet, although broadly used, this use of the term entails several dangers. It risks hiding the fact that almost everything local is somehow related to – if not directly produced by – interconnections that go well beyond the borders of the place, real or imaginary. It also risks obscuring internal conflicts, creating homogeneity out of difference. In the quest for the unique, the typical, it is easy to flatten the coexistence of diversity by naming it exception. Finally, such an understanding risks freezing place in time, closing it to the future and to any kind of change which is then perceived as threat to its identity. We need to understand place identity as uniqueness, but a uniqueness which is at the same time locally and globally interconnected; the same, yet different; continuous but changing. Place identity this way is a process rather than a being.

Coming back to the case of Athens: if we take the above considerations seriously, it will be impossible to define a single Athenian identity. This of course does not mean that we do not have something in our minds that we call Athens. Yet, every time that we try to catch it in a few words, the task becomes almost impossible. Art seems to be much better positioned to convey the sense of place. Books, films, songs, pictures etc. can express it in words, images, forms, feelings, denotations and connotations, metaphors and similes – in a vast array of rhetoric schemata. Art takes over where our scientific language deserts us. It may take up the vestiges of the past and rearrange them for the future, give voice to multiplicity, embrace internal contradictions, cross borders, continents and oceans.

In times of crises people tend to talk a lot about identity. In 2012 Athens (Greece) finds itself in a deep multiple crisis: economic, political and cultural. Questions of belonging (together) are constantly raised. Who are we and how do we relate to our home land/city/place? How do we relate to others who share that space with us? How do people in far away places perceive us? What does it mean to be an Athenian? Is it similar to being Greek? And how do we define that “Greekness”? Is it something given to us down the centuries or is it something we produce daily? Are symbols the mortar that keeps us together – the Acropolis, the Attica landscape, the name of the city, Athenai, which has endured millennia? Is the simple fact of coexistence in one place under a “contrat social” enough to create a common identity?

When Eri types into her telephone in the neighbourhood square in Kypseli, she carries with her the life of generations before her, their dreams and expectations, their hopes and fears. Yet, Eri’s road will cross numerous others; it will intermingle with that of the elderly munching ‘passatempo’ on the bench; with the war invalid who owns the ‘periptero’ and the anonymous designer who first planned it; with the blocks of flats that enclose the square, with their solid materiality and soft soul. And at that very moment – at every moment in every spot – this Athenian identity will be produced, contested and reproduced, in million variations and contradictions.

* This essay appears in the catalogue of the Greek pavilion at the Venice Biennale 2012. Editor: Panos Dragonas.

This entry was posted in opinions and tagged Athens, identity, Kypseli. Bookmark the permalink.

1 Response to The many faces of Athenian identity*