Open Data – What Now? 7 Ideas for Your City 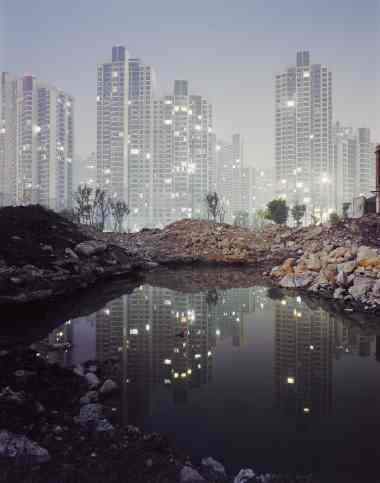 Everbody talks about smart cities while nobody really knows what hides behind it. Is it about open data and communication technologies or about mobility? Is it about energy-efficient buildings or social innovations? Or is it an integrated blend of those. This year’s Alpbach Technology Forum drew its crowd into the Tyrolean mountains in Austria. The visitors were keen to shed light on these and many other questions. Scientific, sometimes personal, sometimes political, sometimes boring statements were made. Intense discussions flared up, especially around open data and privacy. The big gap between the conservative, European view on this ambivalent topic and the joyfully experimental one of the Americans became visible once again. At the end of the day, even Paul Horn, professor at the Center for Urban Science and Progress at New York University had to admit that his city is still at the beginning, when it comes to topics such as, open data projects. Therefore I decided to report in this blog entry on how open data hopefully contributes to making our cities smarter.

In my eyes the New Yorkers are doing very well in experimenting with nearly 1300 data sets on their open data portal. Side note: In the past it cost thousands of dollars to acquire this data as a private person. But that’s over now. The portal already drives in a wave of innovation – coming from the citizens themselves. A team of designers, for instance, which wondered where their 600.000 street trees are located and which tree types are most common, used this portal to create the Interactive Visualization of NYC Street Trees. Everybody can now find out about the variety and quantity of street trees in all five NYC boroughs. 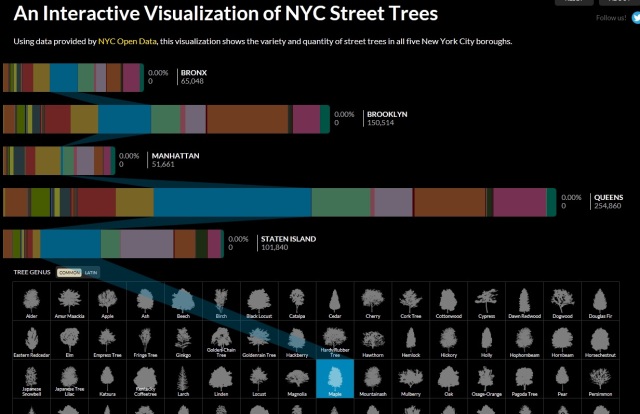 Take for instance Brandon Liu, a 24-year-old computer programmer who used a wad of data in order to develop an extremely detailed cartography of more than one million buildings in New York – all colour-coded by year of construction. A blogger writes that it looks as if somebody splashed the city with some kind of luminescent ink that reveals the age of buildings: vast green swaths of 20th-century development, freckled with verdant blue and purple structures slapped together in the 1800s. 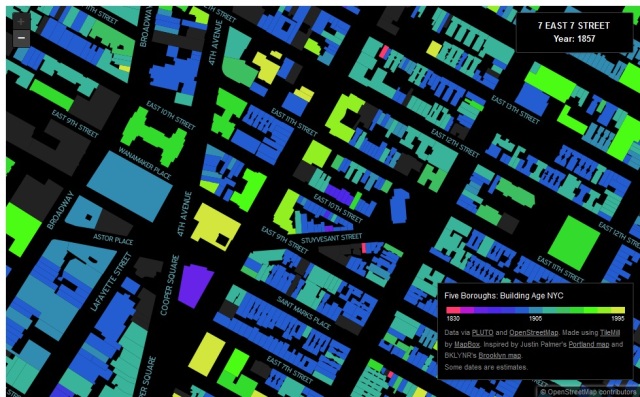 Numerous open data projects are on display under Free our data and Data Store – Show and tell of theguardian. Most of them break new ground in United Kingdom. For example, one interactive map aggregates data on financial distress at an individual level, from monthly nationally representative polling of UK consumers. Each area is coloured according to its results on a financial health index score from one to 100, where 100 is the most financially distressed. By clicking on each area you can see how many people are estimated to have taken out payday loans or defaulted on a loan. Interestingly, “the pockets of distress are located in areas of affluence and, conversely, pockets of low distress amongst areas with relatively high deprivation.” says Matt Oakley, head of the project. 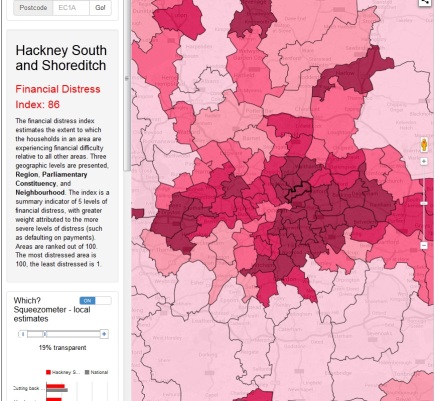 The following map is typical for Britain’s humour: by wiping your mouse through London’s boroughs you will find out the price of a square foot of property in this area – and receive ironic reference points for size. For example, £100 will buy you in Camden Town an area of 0.09 square feet, equalling the seize of 1.1 iPhones. The map additionally delivers property examples in the borough. 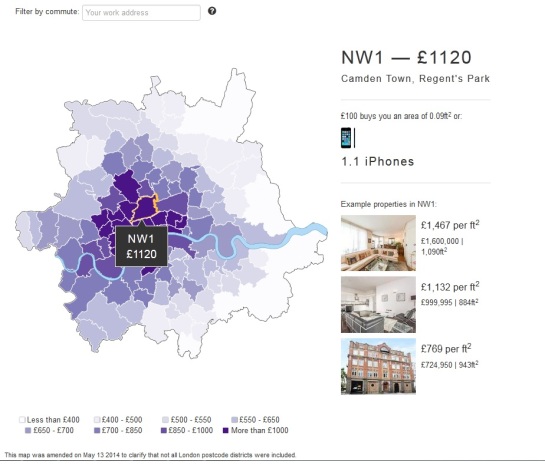 Lives on the Line is a project by a student from London. He took ultra local-level life expectancy data and mapped it with London’s underground stations. Life expectancy varies from stop to stop and it definitely correlates with the quality of air and the amount of recreational areas in your neighbourhood. 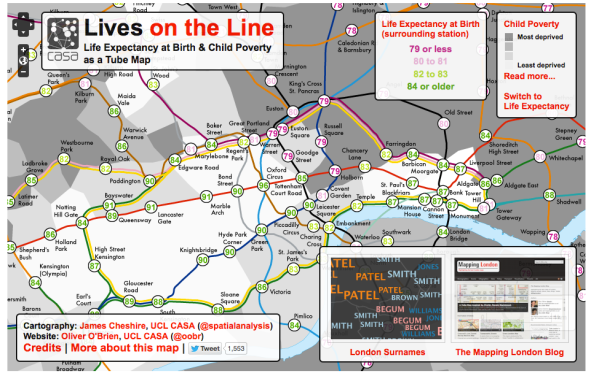 What I find even more thrilling are live maps. The Live London Underground Map was brought into being in June of this year, after Transport for London set up an API – an applications programming interface, allowing computers to query for data it holds – that could also generate live information about the exact location of trains within its network. theguardian states that other services will soon be available through API, like live traffic disruptions, realtime road message signs, findaride (licensed private hire operators) and many more.

London’s property rental service is getting creative too. It used its database to create another interactive experience. Have you ever wondered how the cost of rent changes as you travel down the underground? The following visualisation depicts exactly this – in real time. Click on each underground line and you see a chart showing the average rental cost for properties within a 1 km radius of each stop. By clicking on a station you will see the properties behind the data. 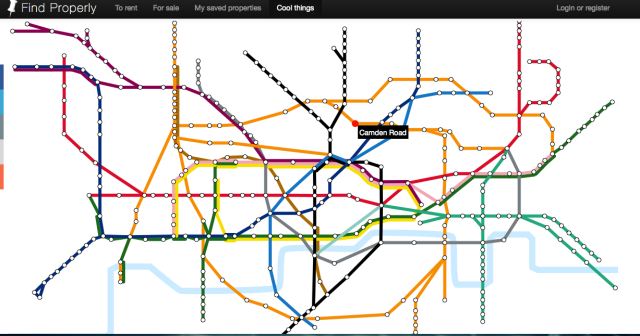 Last but not least I want to give you an example on how London prepares for the challenge of an ageing urban society. In the course of a project whose goal it was to reduce the impact of continence of elderly people, two students developed a map to find public toilets within the capital. By reducing continence difficulties for elderly people, the projects wants to assist them to maintain a positive identity and a good quality of life. 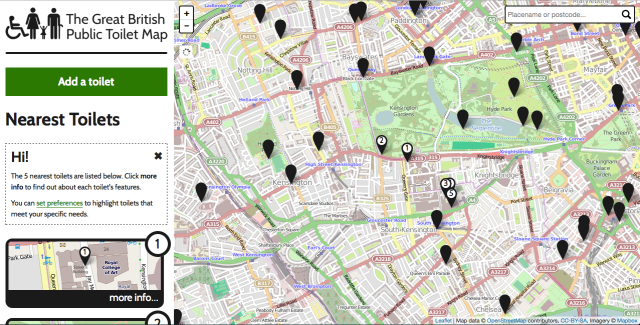 All these open data projects have one thing in common: their data sets have been generated with public money. Therefore these data sets became accessible by the public. The projects evolving extend the available data and the benefit for the citizens. One argument remains unsolved: market-driven offers could be undermined by publicly funded data generation. However, it is not my intention to kick-start a discussion on data privacy. I hope that I could provide you a glimpse into what cities are developing at the moment and I am excited about what future holds in store for us.

1 Response to Open Data – What Now? 7 Ideas for Your City