Notes from a research trip to Crete (3 of 3)

As I return on my travel to the North-side of the island and continue to the West of the island, I visit many more agritourism entities that offer agricultural activities apart from only traditional housing. Two highlights of this research trip are Vamos traditional village and the Milia Mountain Retreat.

Vamos traditional village is located in the municipality of Chania and maybe one of the oldest agritourism destinations on Crete. Nikos Frantzeskakis, president of SEAGE (the Hellenic Agritourism Federatio) has been one of the pioneers of agritourism in Crete by remodeling old guest houses and creating tourist itineraries 20 years ago in and around Vamos village. The local character is visible in the houses and activities such as cooking classes, harvest and walking activities. The latter further amplify the connection to traditional agriculture and rural life. In various talks with founder and owner of the now well-functioning Vamos tradition village, it became evident that the road to success was as rocky as the many unpaved roads on Crete. Still, Nikos Frantzeskakis points out, there is no definition of agritourism by law, leaving the concept vulnerable to misuse and malpractice. Apart from lobby work in politics, he regards the creations of criteria and certification as one of the most important duties of SEAGE in order to ensure quality agritourism in the future. 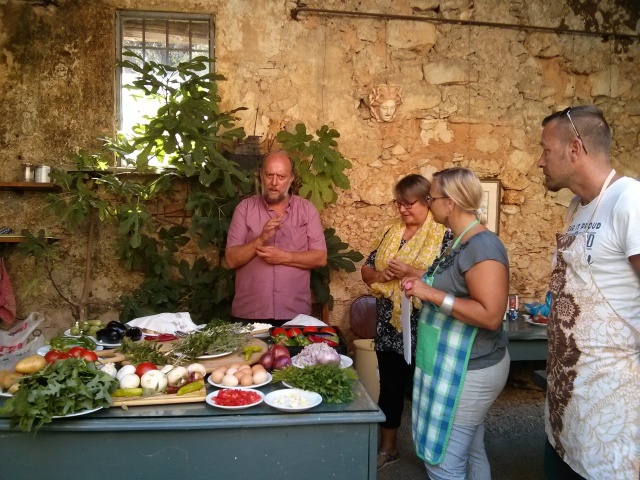 Also, the second highlight, Milia Mountain Resort is one of the oldest agritourism destinations in Crete and as Tassos Gourgouras , the Vice-president of the Cretan Agritourism Union, explains has not been easy to develop. Mainly because of the very remote location of Milia in the mountains close to Chania, renovation and restoration of the abandoned village, which existence was first recorded in the 16th century, proofed to be very difficult. Nevertheless nowadays, 20 years later, visitors are welcomed in a small mountain village which is fully-used as tourism retreat. All buildings have been rebuilt with traditional material with almost no changes to the structure at all. The way to the next village leads five kilometers over unpaved road creating an feeling of extreme remoteness and might be one of the factors which got Milia Mountain Retreat a spot in the list of the world’s best ecolodges of National Geographic.

No matter whether it was the extremely luxurious Metohi Kindelis, surrounded by an organic farm, the Vamos traditional village or Milia Mountain Retreat, all entities had one thing in common – the owners. The owners weren’t the same, but all of them were very well-educated and some had returned from big cities or abroad in order to set up alternative tourism businesses in relation to agritourism. The stereotypical farmer, one would have in mind thinking of agritourism, was the exception. As Kizos and Iosifides (2007), two Greek scientists, pointed out many agritourism business had failed in the past, because of a lack in management skills, the abundance of governmental support and poor networking. Maybe the owners of the established agritourism business had only been the remains of what had been started in the 80’s with EU-funded programmes as rural development measures.

From what I have seen now, I can tell that agritourism in Crete is a fairly young concept, with a large variety in the forms of agritourism that still has big potential for further development in the public and private sector. Without question many matters still remain to be solved:  political support, a legal framework, the establishment of quality standards, better education for business owners and improvement of leveraging synergies from networking. Nevertheless, the Greek culture of hospitality and the long-lasting tradition in agriculture form a potent basis for a fruitful future development of the sector.