From the “Bridge of Spies” to the Smart City: a Berlin narrative

Reading the multiple stories that have been praising Berlin with its youth culture and creative scene as the rising star among European cities, it is easy to forget how recent this development actually is. The 2015 Spielberg film “Bridge of Spies” reminds us of what Berlin was mostly about until the fall of the Wall in 1989: World War II (and the Nazis) and the Cold War (and the spies). These two images are still deeply woven into the city’s fabric, although today they’ve become a kind of spectacle for thrill-seeking tourists. (There is a third one, but I’ll come to that later). In this short article I’m offering a personal account of how this passage from one narrative – the dark one – to the other – the playful one – took place. Of course memories cannot always be trusted. Although I was in Berlin on and off since the mid 1980s and permanently since the fall of the Wall, I’m sure my mind has put order and continuity into a much more chaotic and heterogeneous development[2]. 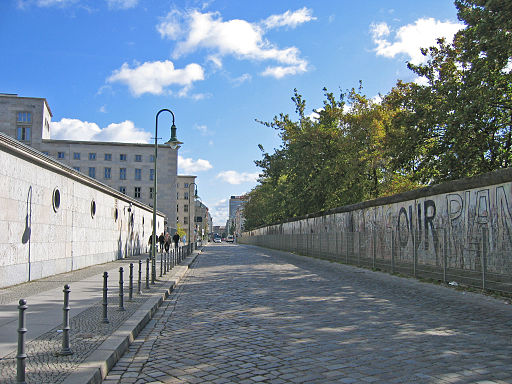 The Berlin Wall today. By A.Savin (Own work) [FAL or CC BY-SA 3.0 (http://creativecommons.org/licenses/by-sa/3.0)%5D, via Wikimedia Commons

The Fall of the Wall on 9th November 1989, marked not only the beginning of a new era for the city, but rather for the whole planet. Berlin, being in the centre of all this, became the emblem of change, of re-birth and self-reinvention[3]. It is on this “New Berlin” as the official slogan of the late 1990s goes, that all the city governments after that based their place branding strategies. We can trace this development by roughly separating the narratives as they build up in different decades: in the 1990s, the 2000s and the years after 2010. As you will see the dates are not as arbitrary as it seems.

The 1990s saw an unprecedented building boom in Berlin with planners, architects and developers from all over the world redefining the city centre: Potsdamer Platz, the Reichstag building, the Jewish Museum and a lot more. Indeed, architecture became the core of a new urban narrative since it served several needs at the same time: there is an element of novelty; there is a subtext of investment and an artistic dimension to boot. All three components – novelty, investment, art – became important ingredients of the New Berlin and are still with us today. A lot has been written about iconic buildings and how they are used to create distinctiveness and put cities on the world map, so I don’t need to delve into that. What is maybe interesting is that the major iconic building in Berlin became the Reichstag, and the way it was redesigned by Norman Foster. It is interesting because it has all the above ingredients, but also carries connotations of history (continuity and breaks) as well as political power. There are few buildings with such a diverse and heavy symbolism.

The 1990s saw a second parallel development, which initially went unnoticed by the official rhetoric, but was soon to find an eminent position in the new Berlin image. A new cultural scene was forming, itself based on that third narrative I left unmentioned above: the artistic underground of the 1970s and early 1980s – the sex-and-drugs-and-rock’n-roll thing. There were two main streams to the cultural landscape of the 1990s: the birth of techno music and its legendary clubs on the one hand (Planet/E-Werk & Tresor) as well as the visual arts with the gallery scene on the other.

Tresor club in Berlin. By No machine-readable author provided. MichaelBrossmann assumed (based on copyright claims). [Public domain], via Wikimedia Commons

2001 marked an important date in Berlin politics: the coalition between the conservative party and the social-democrats broke down following a serious banking scandal. A new Mayor, the mainstream social-democrat Klaus Wowereit, took over and was to remain in that position until the end of 2014. During the first decade, 2001-2011 he governed together with the party Die Linke, a left-wing social-democratic party. He was the one who in 2003 offered unknowingly what maybe became the best-known slogan for the city: “poor but sexy”[4]. “Poor” referred to the dire city finances, but “sexy” was a tribute to Berlin’s creativity – the main line of a new narrative that starts developing at this time. Creativity was to mark not only Berlin’s narrative in the 2000s, but also most major policies: economic development, urban planning, cultural policy etc. Policy-making and place marketing complemented each other in this concept that was capable of encapsulating both the stories from the 1990s (novelty, investment, arts) and of taking them further to connotations of youth, innovation and economic growth. Reseach on creative industries and the so-called creative class, show how lifestyle, consumption, entrepreneurship and culture merge in particular urban milieus. The place marketing strategy in Berlin worked with these assumptions showing that, beside the alignment of generally divergent public policies, the same narrative was able to attract  investment, talent and tourists.

2011 saw the end of the centre-left coalition and the establishment of a centre-right one, initially again under the same Mayor. At the same time we can see a shift in the official policy, away from creativity in its more cultural dimension and closer to the digitalisation and tech entrepreneurial scene. In reality, it was the same ingredients as above, whereby culture was substituted by technology. The Smart City, co-working spaces, start-up hubs are the new buzz-words. Based upon Berlin’s own vibrancy and nourished by the thousands of talented young people fleeing crisis-ridden countries in the European periphery, this new scene exploded onto the international stage. It was now impossible to tell who was the tourist and who the local, who the visitor and who the resident – as it was impossible to say what was leisure and what work, what was the office and what the party. The tourist and the investor/entrepreneur becomes one in club spaces such as the Berghain, while the new mobility of this particular crowd allows it to glide from one creative city to the other – Barcelona, Berlin, Amsterdam, Copenhagen or London.

As all narratives, this one, too is selective. There are other possible accounts that are overshadowed by this one: there is the account of the city where housing is getting less and less affordable and where poorer people are pushed towards the periphery; or of the city of income stagnation and rising poverty; there is the account of the persisting high unemployment (approx. 11%) and of growing inequalities etc. My attempt was not to silence any of them, but to show how the official narrative has developed over the years and how Berlin has come to the reputation it has today. And by no means do I confuse reputation with reality.

[1] This blog entry is based on a small presentation I held in Paris during the conference “LA MISE EN TOURISME DES TERRITOIRES DU GRAND PARIS” organized by the Atelier International du Grand Paris on January 21st 2016. http://www.ateliergrandparis.fr/news/?p=7188

[2] A more substantiated account of the same story can be found in Claire Colomb’s book “Staging the New Berlin”. As the book ends before the latest developments, which I place at 2011, I felt there is something to be added to it.

[3] Of course today from a distance, I see that date as the end of something, rather than the beginning of something else.

[4] This is a quote from an interview in Focus Money magazine in November 2003 and not, as many people think, an official claim developed during a place branding campaign.

1 Response to From the “Bridge of Spies” to the Smart City: a Berlin narrative