From User to Neighbour – How Social Media Enters the Local Level

One could assume that individualism in urban areas has been underpinned by a sense of communitarism since the last decade. Terms like community gardening, food coops, shared bike workshops, neighbourhood meetups or backyard sales are gaining weight. Enough weight apparently for young internet startups to launch specific social media services. It is all about strengthening the sense of community in order to raise one’s identification with the surrounding area.

The portal nextdoor.com, launched in California in 2010, defines itself as a private, social network for neighbourhoods. Once signed up with real name and address, users can start chatting immediately with registered ones from their closer living environment. Popular topics: a helping hand to paint the apartment, dog sitters, hair cutting or a simple invitation to a neighbourhood barbecue. Getting in touch with former unfamiliar neighbours is not the only service. Local economies substantially contribute to an area’s living conditions. Thus on a particular platform users can recommend local services. In the best case, local economy can be strengthened and car drives avoided to stores far away. Besides that one can find information on empty store fronts.

everyblock.com, founded in 2007 in Chicago, even goes further. In addition to the social media service for neighbourhoods, great emphasis is put on transparency. The portal gets specific information from open data bases from city administrations. Thus it can keep its users posted with ongoing construction permits in their environment or other urban development projects. Further it offers location based crime reports – not insignificant for some American cities – and local media digests. everyblock is already enjoying such popularity that it has contributed to the formation of a citizens’ initiative in New York’s Harlem. They post their meetings in the everyblock calendar and reach out to their fellow neighbours when they need volunteers to clean up a neighbourhood park and to sign a petition for local playground repairs .

This autumn a similar portal will be launched in Vienna. Unlike the American examples zoomsquare.com wants to attract people still looking for apartments in new neighbourhoods. They will be able to exchange impressions about visited objects. Instead of paid real-estate ads, users will find information at first hand. Juicy search results can be saved and compared, reviews of former tenants can be read and first contacts to neighbours can be made. CEO Andreas Langegger: “In case of a moving in, users will be able to inform each other about useful topics relevant to neighbourhoods”. Nevertheless zoomsquare’s success is dependent on the citizens’ interest in their environment and their openness for their neighbourhood. 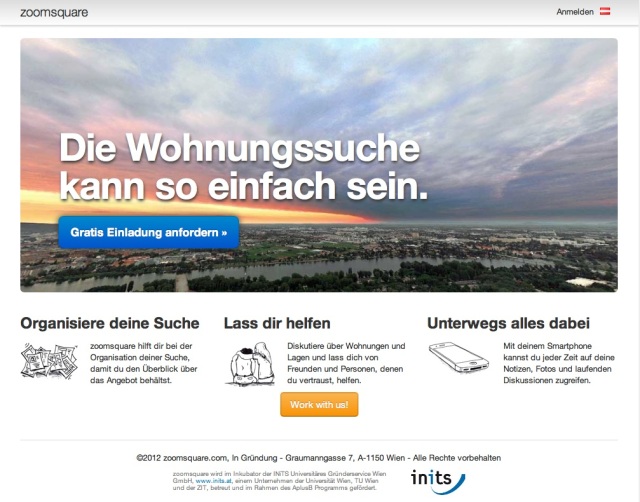 What are the incentives to use such a portal? These services have one thing in common: the golden rule to only share information which is neighbourhood-focused and timely. That is where the innovation is. While other social media channels pride themselves to be independent of time and space, the described services build exactly on these dimensions. It is not a question any more of how many friends you have in how many countries, but rather with whom and what you identify yourself in your neighbourhood. These services are obviously aware of the fact that a solid sense of community is the best basis to work on a neighbourhood’s image. I’ll keep you posted whether Vienna is ready for another social media portal or not.