Logo of the project “Hacking the City” which took place on the occasion of the “European Capital of Culture RUHR.2010.”

The “end of public space” is proclaimed often. Urban researchers complain about increasing and omnipresent surveillance methods in as well as extensive privatization of public areas. The discussion about the decline in public space also focuses on the ubiquity of advertising messages in urban space and the so called “architecture of control” that subtly instructs urban residents’ behavior. Entering the aforementioned key words on google it brings up hundreds of books, papers, essays, articles, lectures, panel discussions etc. about the incorrect, contorted or ruined form of public space. Walking around several European or North American cities with a vigilant eye though, you can find a lot of interventions that face these tendencies creatively with direct actions: billboards turned to plant-holders, self-made zebra crossings and bike lanes, parking lots converted into picnic areas, … In this and future posts I want to give an overview about these direct actions, so called “Urban Hacks”, as a reaction to the loss of public space and show their value in terms of protecting its ideal forms. 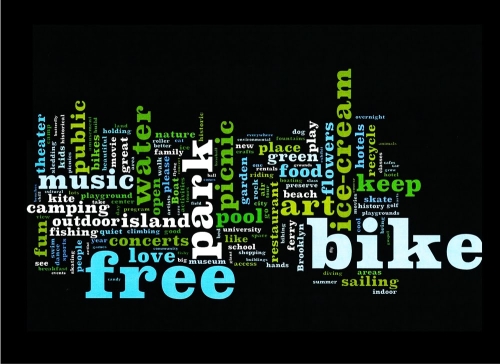 The loss or the end of public space usually means the loss of its quality features: general accessibility for all kinds of human being, its service as a meeting point of total strangers, anonymity (because of the city’s size and the heterogeneity of its residents), its undetermined use (1) and – to add Habermas’ definition of the public sphere – the possibility to freely exchange opinions and ideas in it (2). Recent developments of the public realm seem to bring those ideals to an end. Urban Hackers’ principal points of criticism are the following:

1. The privatization of public space which means the transfer of publicly owned into privately owned space like privately managed shopping arcades or Business Improvement Districts. Public law gives way to private property right which can result in the (multi)exclusion of entire groups of people such as homeless or gangs of youngsters as they might just bother “normal residents”.

2. The increase of monitoring systems for crime prevention purposes. Due to masses of technological devices they already reach a Foucault-like “panoptic control” where residents never know whether they are being monitored or not and are deprived of their anonymity.

4. The use of architecture and design and the installation of street furniture or constructions in public space to determine city residents’ behavior in and their use of it.

A couple of months ago, Valentin gave a very nice introduction to Pop-Up-Urbanism and showed several examples of how  residents install temporary add-ons in the city in order to reactivate distressed or vacant space and also to fulfill their needs within their urban environment. Urban Hacking goes a bit further than that and is a direct reaction to developments in the city Urban Hackers see as threatening public space. Following the book “Urban Hacking. Cultural Jamming Strategies in the Risky Spaces of Modernity”, I choose the term Urban Hacking for those kind of (re)actions, but expand its definition.

I very much like the term Hacking (derived from computer hacking) for urban interventions. It refers to the playful modification of prescribed source code in order to change a system according to one’s own wishes without destroying it (which would be “cracking” by the way). Computer Hackers don’t accept that they’re only allowed to work within certain prescribed programmes but never to write them, that they’re allowed to play within them, but should not change the rules, that they are allowed to manage data but must not define the management policies (read here for more information about hacking). Urban Hackers follow the same philosophy. They don’t encounter urban (public space) reality as a closed and completed construct that cannot be changed (or only changed by its “administrators” like urban managers or politicians) but aim to modify it in a playful “bottom-up” way.

In my definition, Urban Hackers are supporters of Situationism, Adbusters, Street and Performance Artist, Communication Guerillas, Guerrilla Gardeners and many more. Their practices and methods are diverse and Urban Hackers are not clearly marked as a community. What unites them, however, is the pursuit of a transformation of existing urban structures in which they play the role of “co-authors” of “urban source code”.

After having given this theoretical introduction I will present a selection of Urban Hacks in my next post. Street Art and Performance projects, Adbusting actions, Parcours, infrastructural Add-ons and Guerilla Gardening projects serve as wonderful and ludic Urban Hacking methods to maintain the qualities of public urban space.

(2) Habermas, J. (1962/1995): The Structural Transformation of the Public Sphere: An Inquiry into a category of Bourgeois Society. Cambridge: MIT Press.

1 Response to Urban Hacking as a Quality Management Tool to guarantee high-value Public Space (1): The end of Public Space?!