The Human Costs of Urban Renewal in Hong Kong: Dave and Christie, Part 1

by Rowena Lee and Patricia Woo*

Dave never quite enjoys climbing the five flights of dark, narrow staircases to his home.  The landing on each floor is so small, he thought as he put one foot in front of the other, he would be pushed off to the stairs if a pregnant Christie emerged from one of the doors.

Christie and Dave love each other.  She is 26, saleslady in a high-end fashion boutique.  He is 35, an experienced merchandiser in a medium-size clothing enterprise. Together they earn HK$28000 (about 2800 Euros) a month.  HK$3300 goes to rent, for a “sub-divided apartment” 2 blocks away from Dave’s office.

Dave stops at the “door” of his apartment – more accurately, the once-existed door of the original 60 sq.m apartment which was transformed into 3 smaller apartments for profit.  He and Christie live in the “medium” size one, 15 sq m.  Another couple and their 6-year old son live in the biggest sub-divided part, 20 sq m, and a quiet middle-aged bartender lives in the smallest apartment, 10 sq m.

By sub-divided his apartment into three units with self-contained facilities, the landlord makes a monthly total of HK$9300 in rent, a whopping 55% more than what he would make if he rent the original apartment out in market price.  Each sub-divided apartment is equipped with its own electricity and water meter.  The landlord charges HK1.2 for each unit of electricity consumed, 30% higher than the HK$0.9 charged by public utilities.

“Are you going to live here for another 1, 2, 3 years?” exclaimed Marion.  “What’s there in it for you?  How about I lend you the downpayment for buying a proper apartment, say 40 sq m in Ngau Tau Kok district?  You just need to take a 40-minute bus to work.” 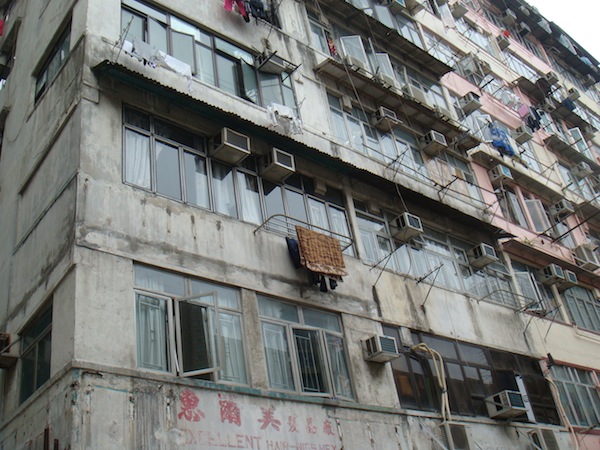 “That sounds good,” said Christie. “But how are we going to live after paying the monthly mortgage of $8000? Plus the additional transportation cost of $360 per month for each of us?” “For the same price, we can get a 55 sq m apartment in Tuen Mun district, the apartment will be comfortable for a family of four, Christie…””Are you crazy?  That would cost each of us $900 more for transportation…”

Marion couldn’t quite understand this.  She was brought up in Mainland China by granddad and grandmom.  To her, two persons spending months and years in a toy-size flat of 15 sq m is inhumane even by Chinese standards.

Dave knows.  The building is some 50 years old.  The drainage system is approaching collapse, with two in three original apartments being sub-divided into 3 units.  To make the sub-divided apartments more appealing to tenants, landlords create long, narrow corridors that had never existed in the mind of the building’s architect.   The building is not under any proper management.  Each tenant (yes, tenants) pay $50 a month for daily garbage-removal service by a woman worker.

Hundreds of such buildings stood on the forgotten streets of aging urban districts in Hong Kong.  In June 2011, one of the tenement buildings at the end of the street caught fire, killing 4 plus an unborn child, and injured 19.  It was only after this killing fire that the Government started to show some real interest in sub-divided apartments.

Tear them down?  Ask the owners to make sure that their apartments follow fire regulations?  Force the whole building to come up with a solution?  Provide affordable housing in these areas to shift the demand-supply curve?

Dave has something to say.

“I know this is not the most ideal environment to live in,” he shrugged his shoulders, grinning, “but the landlord and I each get what we want.  He earns money, I get my own place.  Small as it is, I save valuable transportation time and money.  Mom does want me to move back.  But elder brother John, his wife Fan and their Mainland-born child Joseph are already sharing the 40 sq m public housing apartment with dad and mom.”

“Marion, I admire your knowledge of Hong Kong public housing policy, but you miss the crux here – Fan and Joseph are not Hong Kong residents.  They are “invisible” in the eyes of the Government although in reality, they spend more than 10 months here using a visitor’s permit.” 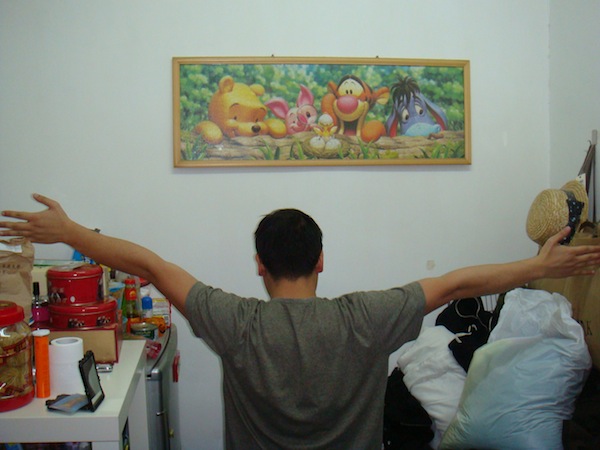 The tiny living room is only 1.5m wide

“More and more owners of decrepit buildings are joining this wave.  They flock to where the greatest profits lie.  For people in my income group, we have passed the threshold for Government public housing.  Even if I am still in, you will have a hard time convincing me to move to public housing in those faraway districts.  What is the point for me to end a normal working day at 6pm, spend 90 minutes cramming in a bus, just to arrive home empty-stomach and seeing the “pleasant” surroundings of a new town in darkness?  Why do I want to move away from where jobs are, right in the urban centre?”

“Dave, the morning news said the Urban Renewal Authority is going to redevelop your street!  Go get the compensation and move to a better place.”

“The ownership of these old tenement buildings is so scattered, I doubt how long URA will take to collect the critical mass of ownership.   My landlord already heard this, he said he’s going to hang on as long as possible.  He’s milking good money from his apartments, what’s the point of selling his apartments to URA now?  Mind you, the URA pays compensation by interior area, but owners of saleable apartments in the market charge you for buildable area!  They told you, you can get a 7-year old apartment of similar size in the same district, and you believe! Ha!”

Although many are appalled by the tragedies of fire in sub-divided apartments in Hong Kong, not that many are willing to tackle the root of the problem head-on.  Flat land is scarce in Hong Kong.  The Government has not been moderately successful in decentralizing job opportunities from the traditional urban centre.   Focus on building new towns, serviced by railway trunks, in the past 30 years has left many flat spots right in the middle of town unattended. 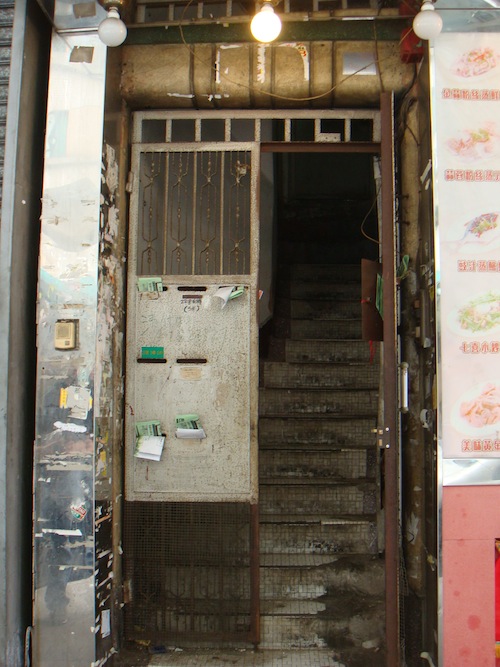 What could be a more sustainable land use policy, if we look another 30 years ahead?  Building condominiums on wetland and country parks, reclaiming land from the sea to make new buildable land, even renting land from nearby Shenzhen, or sensible and well-planned re-invigoration of developed areas?

Re-invigoration often means gentrification for policy makers.  While this approach is not objectionable in some spots, the lure of a gentrified, middle-class environment can overshadow many genuine social needs.

Encouraging safe, simple, affordable housing as a new option for the urban “too-rich-for-social-welfare-but-way-too-poor-for-buying-their-own-home?” If the median income for an average Hong Kong household is $20500 (s. Note 2), how much is affordable for a young couple trying to build their own home?

* Rowena Lee and Patricia Woo will be writing from Hong Kong regularly as of this week.

For facts about HK population and households:

2 Responses to The Human Costs of Urban Renewal in Hong Kong: Dave and Christie, Part 1