The Zabbaleen – Functional Informal Waste Management in Cairo – Part I 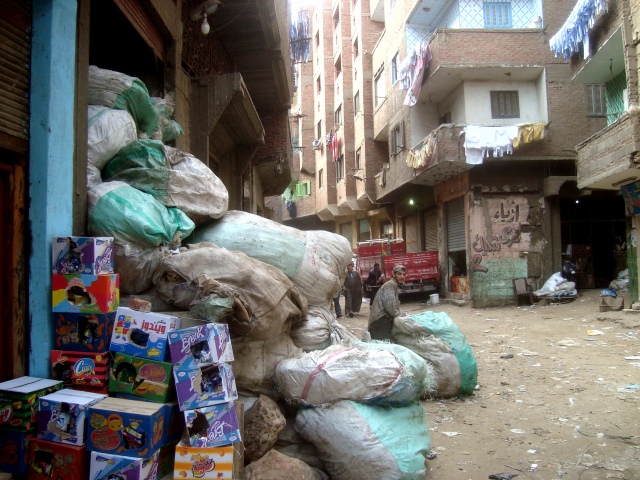 Waste management might belong to those urban issues that are best managed when we do not recognize them. Once we are complaining about dirty streets or overflowing trash cans, we are reminded of hidden waste management being a true backbone of the urban system. In Cairo, Egypt, the waste management system has its roots in the 1880s. Former oasis inhabitants, the Wahis, were migrating into Cairo and started to earn their living by picking up the waste of every household and selling it to public baths which used the waste for heating. After oil heating replaced the waste burning in the 1920s, the Wahis began to sell the waste to Coptic immigrants from the South of Egypt which used the organic waste of the trash for feeding their pigs.

With the years, the Wahis outsourced the waste collection and recycling services completely to the Coptic immigrants who were soon to be called Zabbaleen as they developed waste recycling into their major source of income before the selling of pigs. In this system, where every household had to pay a fee to the Wahis for waste collection, the Zabbaleen took over not only the collection but also the sorting and recycling. They were dependent on the Wahis who have held the waste collection licenses and could thus afford paying the Zabbaleen only little money for their services. The situation was even more difficult for the Zabbaleen, since they had to pay a monthly fee upfront to the Wahis in order to obtain the right to collect the waste in a particular block of a neighborhood and to reuse/recycle it for their own means.

Based on the efficiency in recycling, various actors have held stakes in this highly profitable business. The Zabbaleen became more and more specialized in recycling any kind of materials, from plastics, glass, and paper to metals and textile fabrics. Nowadays, we are talking about a recycling rate of at least 80 percent (in comparison, recycling high tech country Germany reaches 63 percent)! This high recycling rate opened up business opportunities for selling fine-sorted recycled materials. Besides the Wahis and the Zabbaleen, a third group entered the stage: the Mo’allimin. Having been Zabbaleen in the first place, they founded recycling enterprises and invested in machines that could further treat the sorted waste before selling it to producers for reuse.

Around 2002, the municipal waste management agency, the Cairo Cleansing and Beautification Authority, wanted to get hold of this still informal system. Under the pressure of the IMF (– during the reign of Mubarak Egypt has been a prime partner and experimentation field for any kind of neoliberal policy measures by international organizations –), the municipal government decided to privatize the waste management system and signed contracts with European enterprises who then took over the waste management of Cairo based on long-term contracts. Besides the Wahis and Mo’allimin, the Zabbaleen were the most threatened in their business practices. The Zabbaleen were hit even harder when the public health agency ordered the killing of all pigs in Cairo in the wake of the swine flu in 2009, leading to a public outrage that could only be ended after religious leaders arranged a damage compensation for the Zabbaleen.

After some time, the European enterprises realized that their system would not work under the local conditions, because people were used to the service the Zabbaleen provided and where not willing to bring their garbage to public cans in the streets. Furthermore, the enterprises were not able to find enough employees, because, among other things, the Zabbaleen did not want to do this work for various reasons. As a result, the European enterprises started to subcontract their waste management – and whom to ask but the Wahis who have managed it in the first place? The Wahis took over the service contracts and outsourced the waste collection to the Zabbaleen once again. So, after a few years of formalization and privatization experiments, Cairo was back to its original waste management system with the unnecessary trouble of being bound by contract to pay European enterprises which then make profits out of selling the licenses to the Wahis who pass on the tasks to the Zabbaleen.

To make a long story short: Observers reached the understanding that a sustainable and feasible waste management has been, is, and will be only possible with the Zabbaleen due to their well-designed waste recycling system, social relations with the households, and experience with the service delivery. In the second part of this article (here), we will discuss current developments and possible future changes to the waste management system in Cairo.

* The corresponding research has been conducted during a field trip in February in Cairo by the following members of a study group: Jakob Hebsaker, Juan Hernandez-Westpfahl, and Eugenia Winter. We would like to thank Dr. Laila Iskandar Kamel for sharing her time and expertise.