Boris Johnson, Mayor of London, on a Barclays sponsored cycle

As a passionate cyclist, I regret not being a Londoner: I won’t be able to vote on May 3th this year. On that day, Londoners will elect their mayor for the 2012-2016 period. Current mayor Boris Johnson (Conservatives) will run for his second term, while Ken Livingstone (Labour), London’s mayor between 2000 and 2008, is his main challenger. With the London mayoral elections campaign on its way, the Guardian launched a “Manifesto for a model mayor”, in which ideas for the city and requirements for its mayor are collected. This sympathetic initiative is an interesting form of “open journalism” (although it might be less spectacular than Iceland crowd-sourcing its constitution).

In this blog entry I will talk about “Boris Bikes”, Barclays’ involvement in London cycling and Guardian reader’s suggestions for cycling improvements in London.

In 2010, Boris Johnson presented a programme of policy measures to improve the city’s cycling infrastructure, in cooperation with Barclays. Barclays, one of the biggest British banks, is financially involved in the project with some 50 Million Pounds. Many of the project’s elements, such as cycle lanes, bicycles and websites are Barclays branded. One of the most prominent elements of the project are the Barclays Cycle Superhighways. This network of Barclays-blue painted cycle lanes covers some of the most intensively cycled routes in central London (see map).

Although one can argue about who is to credit for the initiative, the programme is most frequently related with Boris Johnson. The blue bikes are even called “Boris Bikes” by Londoners. Also, Johnson himself is a cyclist and has contributed to the cycling debate. He suggested, for example, that cyclists should be allowed to turn left at red lights. In the above video (via) Johnson promotes the use of cycling in the capital, in order to increase the current meagre 2-3% cycling share in commuting.

The programme also involves a bike sharing scheme called Barclays Cycle Hire. It is similar to that of other capitals around the world, such as the successful Vélib’ programme in Paris, which was initiated in 2007 and now features more than 20.000 cycles. In London, the network consists of over 400 Barclays branded docking stations and over 6.000 cycles. The use of the blue cycles is free of charge for the first 30 minutes. The blue cycles all got Barclays logos on them. Of course, this results in an enormous boost for the corporate brand. In addition, Barclays promotes cycling by providing a number of services, including an online cycle route planner, free cycle training and smartphone apps for locating docking stations and available cycles.

In London, the safety aspect of cycling is of major importance. Polls have shown over and over again that for Londoners safety issues are the main impedement for not cycling (Guardian readers seem to agree). The programme deals both the hard and soft sides of the safety issue. It deals with the infrastructure, especially the lack of safe cycle lanes. It deals the soft side, for example by offering  free cycle training. Two days ago, Boris Johnson announced a 15 Million Pound injection to tackle the safety problems. 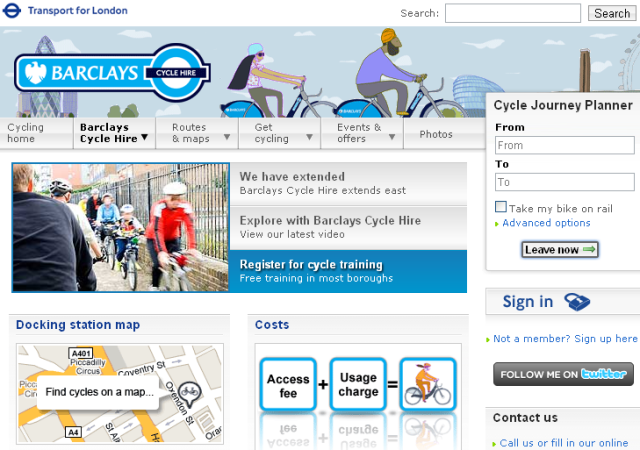 Besides critique on issues such as under-maintenance and bicycle theft (common to cycle hire schemes), the cycle initiative has been criticized regarding more fundamental issues as well. Both Johnson and Barclays have been accused of Greenwashing. Critics put forward that image improvement is the major objective for their involvement in the cycling initiative. Also, they were criticized for the privatization of public sector tasks.

So, is Boris Johnson’s involvement with cycling authentic, or is it just a way to boost its image? Mike Cavenett of the independent organisation London Cycling Campaign (LCC) puts forward: “Boris’s enthusiasm for cycling is real but he is tied into a pro-car mentality.” On their website LCC states that they appreciate the Barclays Cycle Superhighways, but that they are “underwhelmed” by the implementation so far. To improve future infrastructure developments, LCC provides the mayor with constructive critique. Meanwhile, the Barclays Cycle Superhighways initiative was awarded by  LCC as winner of the category “Best Workplace Cycling Initiative” last year. 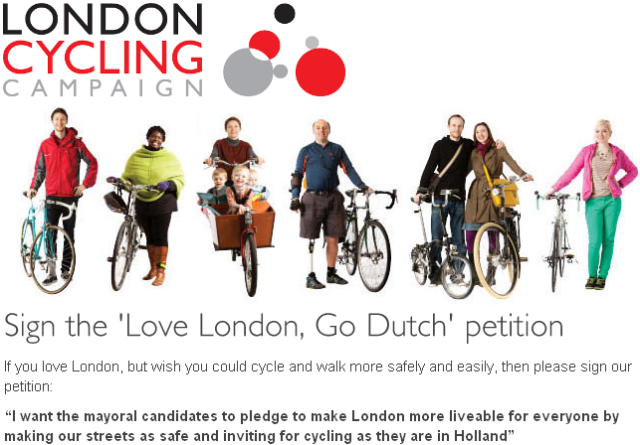 In addition, LCC recently launched the “Love London, Go Dutch” campaign. The campaign calls for “continental-standard cycling infrastructure” and refers to the Netherlands and Denmark as exemplary (see also my recent blog entry on Cycling and Branding in Copenhagen). Similar issues are put forward by (potential) London cyclists commenting on The Guardian’s “Manifesto for a model mayor“-issue on cycling.

Personally, I think the Barclays initiative is a great way to “mainstream” cycling, as it depolitices cycling as linked to specific sides of the political spectrum. In that sense, the involvement of a bank in the project can be seen as an advantage. Although I understand critical notes on greenwashing and privatization issues, I look at the programme pragmatically and focus on the actual changes the initiative has for the liveability of London. 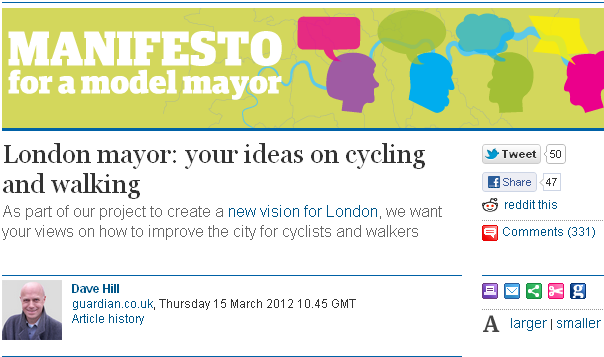