In my first article on cultural flagship projects*, I tried to conceptualize the topic. Now, I will connect the flagship idea ‘Western style’ with the Middle Eastern North African (MENA) region. My last article will deal with the Bibliotheca Alexandrina in Egypt based on a case study conducted during a field trip this month (tbc due to the currently unstable and tense situation).

Finding a cultural flagship project in the MENA region has been much harder than I expected it to be. As the most prominent examples are often named: the opera houses in Damascus (Syria) and Cairo (Egypt), the Bibliotheca Alexandrina in the corresponding Egyptian city, Saadiyat Island in Abu Dhabi, and the recently opened opera house in Muscat (Oman). Taking into account this relatively short list of cultural flagship projects, we can already understand a key difference between Europe and the MENA region: Having been dominantly influenced by Islamic religion and culture, some performance/art institutions do not have an easy standing in many countries of the MENA region. Often rooted in colonial ruling (with all its positive and severely negative impacts), some countries were more open to the idea of theaters or opera houses as institutions of public life and leisure time. On the other hand, museums have a very different past and are often very prestigious institutions of culture and education in the MENA region.

Another difference is the role of mosques that are supposed to play the cultural flagship role with regard to architecture, design, and image, as well as to function as public institutions of religion, culture, education, and politics. For the sake of the comparison between Europe and the MENA region, I will focus on cultural flagship projects that can be found on both sides. 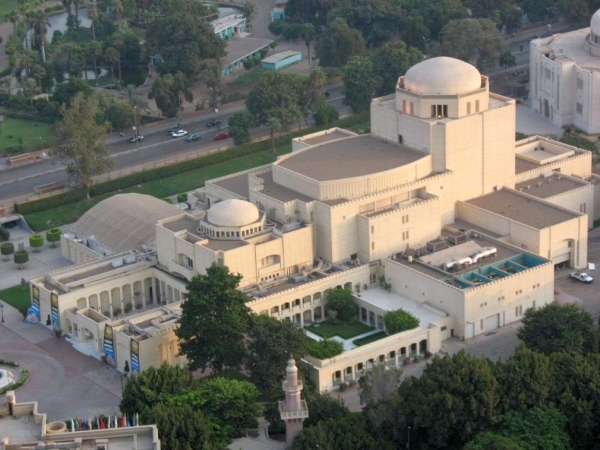 Therefore, I would like to briefly present the example of the Royal Opera House in Oman’s capital city Muscat. Since it was built upon the edict of the sultan, it underscores the often different starting point for cultural flagship projects in the MENA region – until 2011, all MENA countries were non-democratic. When the opera house in Muscat was opened last year, it drew a lot of attention, because even the idea of playing an opera in an orthodox Islamic country is considered a sin by more than only a tiny minority of people on the Arabian Peninsula.

Typical for a cultural flagship project, the opera house was an expensive project (est. 1.8 billion US-Dollar) and can proudly advertise itself as one of the best equipped opera houses in the world with regard to technical features and interior design. Furthermore, the “Who’s Who” of the global opera scene is part of the opera’s program. One has to recognize that the opera was not developed from the scratch, since Oman has had a recognized symphony orchestra since 1985.

Recalling some of the success factors of cultural flagship projects in Europe (see Part I), decision makers in Muscat can underscore that they integrated the opera house in a long-term policy that has already made Oman one of the world’s best countries with regard to education. Founded on the extensive wealth from its oil, the state will be able to secure plenty of financial resources for its flagship (in contrast to most European city administrations’ empty coffers).

So far so good, but the opera house in Muscat also exemplifies the short-comings of cultural flagship projects (in the MENA region): protests against the excessive construction costs coinciding with public anger against corruption were immediately countered by increased public spending for salaries, welfare, and other support programs. The flagship project was the exact opposite of a participatory planning process. Furthermore, the opera is – and this is also a weak point of some European examples – foremost there to attract more tourists to Oman and thus lacks a strategy to invite locals to the world of art/performance. Also, the opera has only a minor positive impact on local economies. One can hardly imagine that it is thought to provide a space of unplanned/unintended uses by Muscat’s citizens.

Nevertheless, there is room for hope: decision makers see their opera house as a cultural flagship in an over-politicized region full of conflicts**. Having played the role of a mediator in political crises before, Oman is seeking to establish the opera house and corresponding events (like the Aspen Creative Arts World Summit) as a platform for a global dialogue of the arts scene in an upcoming, but still challenging (market)place for culture of various types.

The example of the opera house in Muscat seems to be different from Abu Dhabi’s Saadiyat Island where a Guggenheim, a Louvre, and a national museum are planned to be constructed. Here, it does not look like a well-designed cultural flagship project with a broader agenda for the state or region (as in Oman where the project is integrated in a long-term cultural education policy). Abu Dhabi rather continues its supersized Westernization (globalization?) with mega projects that ignore historic roots or local potentials. From what I have read about the two cases, I see Oman trying to make a difference in and for the region, while Abu Dhabi seeks to become/stay a member in the ‘league of global cities’.

In summary, drawing conclusions from only a small amount of actual cultural flagship projects in the MENA region runs the risk of bold assumptions. What can be said is that the implementation of cultural flagship projects with respect to technical-organizational features is very similar in Europe and the MENA region. The political setting, however, provides a vastly different foundation for these projects in the MENA region – project realization is so much ‘easier’ as no citizens groups interrupt it. Unfortunately, locals can hardly benefit from these projects. Besides these aspects, I think that the cultural-religious context and the Arabic-Islamic society need to be studied closely: Building a cultural flagship project can implicate controversial initiatives that necessitate a great deal of audacity by the decision makers. Furthermore, European cities are designed with/around public spaces – this is not the case in the MENA region. Therefore, cultural flagship projects can play a much more important role as public spaces/places than they do in Europe. I will try to further elaborate on this highly significant aspect in my last article on the Bibliotheca Alexandrina’s role before/during(/after) the Egyptian revolution.

Comment: Writing about the MENA region is a very challenging task, since language barriers, complex settings on the ground, and restricted media coverage/research all complicate a sound understanding. Therefore, I am fully aware and apologize in advance that this article can probably not completely live up to the standards of an equivalent research article by an expert/insider of the MENA region.

* The corresponding research has been conducted by the following members of a study group: Pieterjan Dom, Pia Haus, Lea-Sophie Natter, Renard Teipelke.