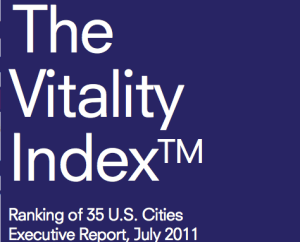 Last summer Creative Cities International (CCI) launched a new cultural impact study in the U.S.  entitled the Vitality Index (VI) [click here for the report]. The study aims to model the “human experience of the city at its heart.” In practice, it is a ranking and assessment which applies the same level of rigor to qualitative factors as it does quantitative ones. It brings to life a city’s human strengths as it respects its complexities: a vibrant downtown, an engaged populace, educational opportunity, economic sustainability, good transport, diversity of population and opportunity, and a citizenry that embraces its history and culture. I was fortunate enough to be able to interview Linda Lees, director of CCI, about their recent study:

1) Could you tell us briefly about the work Creative Cities International does in general?  Are “creative cities” the focus or goal of your organization?

Creative Cities International (CCI) is a consultancy focused on the role of culture in cities.  We consult on urban projects and see our research as a major part of our contribution to the conversation about the present and future of cities.  We care about influencing a different vision for cities and helping them implement change.  And in that spirit, we want to assist cities in finding new ways to ask useful questions about the functioning of a city.

2) What is the Vitality Index and what is its purpose?

The Vitality Index was published in July 2011.  It is a comparative report on the vitality of 35 U.S. cities and a ranking.  Its longer term objective is to be a clearinghouse of what works and doesn’t in cities globally so that cities can learn and benefit from each other.  This report is part of that data gathering and analysis.

3) What initially inspired you to publish the VI?

This is the first year we have published the report.  It has taken quite some time to develop and refine the concepts, criteria, and evaluation process.  It was initially inspired by the discussions around the development of the World Trade Center site in New York after September 11.   We were the only group that organized a conversation with cities that had been bombed (London, Berlin) with a view to learning about their rebuilding experiences.  We felt that kind of conversation – learning from others – would be critical input to planning of the site.  We continued to be astonished at the poor planning process that had been put in motion at a moment which presented a once-in-a-lifetime opportunity to get it right.  Sadly, it was an opportunity squandered.  Out of that experience, however, came a clear knowledge that there are better ways to go about this, but that there is also no process or mechanism to gather and share that knowledge across cultures and disciplines, and also, importantly, that to make comparative experience valuable requires excellent analysis.

4) Which city appearing in the VI do you think would be least or most surprising to our readers?

Obviously, the top cities are least surprising, which is why we spent so little time discussing them in the report.  Much more interesting are the second tier cities.  There are several surprises there, not just to your readers, but to us as well.  Among those are Jacksonville, Florida, Memphis, Tennessee, and St Louis, Missouri.

5) What does it mean to be number one on your list? Are we to understand Chicago as being the most vital of all US Cities? 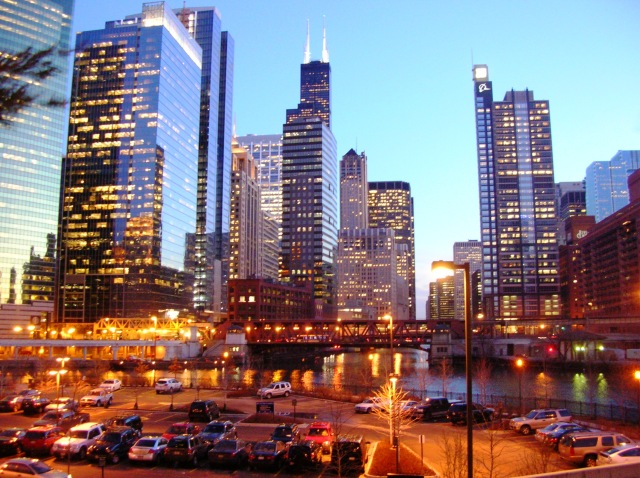 5) Who is the intended audience of your Vitality Index? What purpose might this document hold for various groups such as city planners? academics? local businesses? tourists?

Our intended audience is anyone who is interested in a bottom up approach to city planning and who cares what citizens think about where they live.  Of course, we hope that city officials and developers would embrace that approach, but we also feel strongly that citizens themselves can benefit from this perspective.  Can the VI be used for purposes of branding and marketing cities?  Certainly.  Crucially, however, what we feel best attracts tourists, new business, and young people is what the city is already doing for the people who live there – the “inner tourist.”

6) Detroit seems, to me, an unexpected example of a vibrant community emerging out of economic devastation. Economic prosperity, employment, and the character of local economy definitely have an impact on the vibrancy of communities. What is the role of city planning in relation to economic development? Do jobs need to come before communities? Can a vibrant community sustain economic growth by itself?

Detroit is a good example of both bottom up initiative and top down recognition of that initiative.  The enthusiasm, drive, and loyalty of Detroiters is terrifically impressive.  Wisely, city officials supported the desire of residents not to give up on the city and have chosen to support and enhance many of their initiatives.  At the same time, foundations and venture capitalists have taken note and are investing in plans to support the revitalization of downtown that include attracting younger residents and building a technology campus.  Do jobs come before communities?  Is anything ever as neat as that?  In this case there is clearly a synergy, but I doubt that anyone could point to a moment when the spark occurred.  I suspect that the hypothetical community to be vibrant already has substantial economic underpinnings.

7) The VI mentions  several factors such as “good messiness” that suggest that the most vibrant cities are those that arise organically, sloppily, creatively. What lessons can a city planner take from your VI, if it places so much emphasis on characteristics that seem to be out of the control of traditional city planners?

People generally care deeply about where they live.  Most of them have strong opinions about what goes on in their neighborhood and in their city.  We are not aware of that because they are rarely asked about those likes, dislikes, needs, or aspirations.  City planners, government officials, and developers would benefit if they tapped into this information before starting projects that could possibly endure costly delays, changed plans or total failure because of community opposition or their own bad decision making based on inadequate data.  We know that there are ways to include the feedback of residents in the planning process, which will actually help to ensure the success of the project.

That’s a funny question because I wouldn’t have had the slightest idea how to do the VI ten or twenty years ago, so I’m not sure how to reply.  Coming from an artistic background, I tend to look at this process a bit differently than I think you are implying.  I am a theatre director and a comparatist by training, so I originally envisioned the VI as an experiment in comparative cultural perspectives.   We are trying to translate the experience of people in cities across cultures, translate vocabulary across disciplines and even create new concepts for interpreting experience and building consensus.   Can solutions to urban problems in Bradford, England have any relevance in Panama City?  Can the specialist communicate with the lay person and vice versa?  Can “good messiness” offer a more interesting way to talk what we value in a city?  Ten or twenty years hence, I hope that the VI will have evolved into something that contributes to making better cities for people to live in.

9) Is it possible for a city like Columbus, Ohio to ever earn as stable a spot on the list as a NYC or Chicago? On the other hand, do you ever imagine a VI not holding out a place for cities like Chicago, NYC, or San Francisco?

Columbus, Ohio was a surprise.  That shows how little most of us know and how we are bound by outdated assumptions.  That was what I learned from that experience.  It turns out that Columbus is beginning to rank high on several credible rankings so we are not an outlier.  Can it every earn a stable spot?  I don’t see why not.  You first have to allow for the fact that Columbus is not New York or Chicago and never will be.  That is one of the things we are quite proud of, that is, that we do not and do not want to impose a “model city” creative or otherwise on different places.  Once we do that we stop listening to what people have to say about their city.   Is it possible that the top cities won’t be there at some point?  It might take a long time, but of course it is possible.  I have friends right now who are still very unhappy that New York did not come in first.

10) Is the VI something that other cities are supposed to emulate?  Or is it intended to set cities in competition with each other?

Our intention is to point out what is working well in the cities we survey, so that residents, city officials, etc can embrace that and envision other options out of that foundation.  There is great energy and commitment in these cities.  Yes, they want to improve and that may take on a competitive edge, but I don’t see that as a negative.  We are trying to establish good guidelines for what to do or not do and to provide feedback about when cities are getting that right.

11)In your article, you state the VI “is a ranking and assessment which applies the same level of rigor to qualitative factors as it does quantitative ones.” And, at the top of your list of characteristics defining a vital city is “Good Messiness”, which seems to be the most difficult to qualify and impossible to quantify. How is this VI getting any closer to the objective of bringing order to our understanding of vital cities  if the most important measure is also the most vague?

This goes back to the issue of feedback.  You are right that good messiness is critical and also difficult to assess.  That is why of course we must take it on.  But we are helped by the voices of the people who are interviewed and who answer the survey.  It is less about what we define as good messiness than what they tell us.  Our job is to provide good analysis.  Can a hair salon be as important to the well-being of a community as a cafe or restaurant?  Can a garage that also sells coffee and fresh juice matter as much to residents as replacing it with a museum addition? It turns out the answer is yes in both cases.

12) What is the future of the Vitality Index? Is this going to be published yearly? Are you looking to expand your study outside of the U.S.?

We intend to publish the VI every two years and also add cities to the study.  We would like to expand the study globally for which we will need partners, of course.  We hope that the VI will be used locally to assess projects and development schemes.  The ranking sets out the criteria which is important to influencing the conversation about cities and their future, but the VI’s real value is its usefulness in making cities better.

To learn more about the Vitality Index and Creative Cities International visit the website: http://www.creativecities.org/vi.html