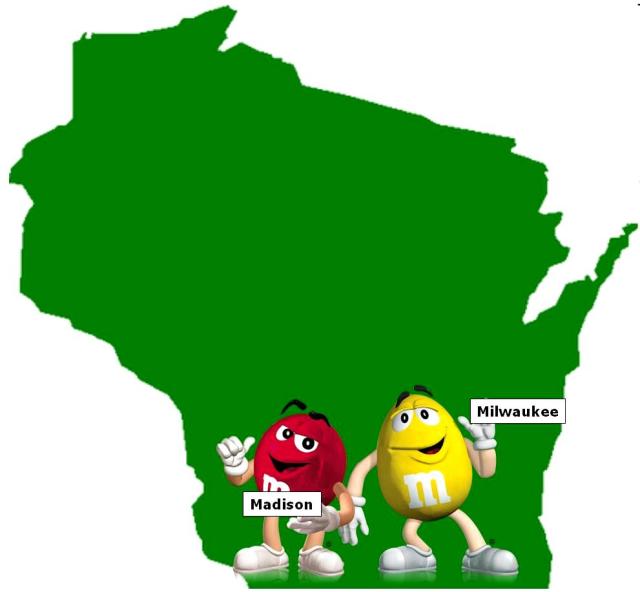 Only four mayors in 60 years – three of them socialists (sic!). Considering Milwaukee’s 20th century history, the preconditions are really exciting for a US-American city. The Sewer Socialist movement emerged from Milwaukee and included famous figures like Victor L. Berger (see here for more information). With 600,000 citizens, Milwaukee is the largest city in the state of Wisconsin. In the last article I wrote about Wisconsin’s capital city Madison – also an ‘alternative’ city but with a completely different outset. Milwaukee, as part of the Rust Belt, experienced the well-known decline of heavy-industry cities at the Great Lakes. When I told my American friends that I was going to visit Milwaukee, they all ask me why on earth I would want to go to this ‘city in decline.’

However, as with many large, formerly more important US cities, Milwaukee has so much to offer – it simply does not fit into the skyscraper, global-modern scheme of US coastal cities. Considering the rather stale beer you can get in US supermarkets, it is already worth noticing that Milwaukee (with a distinct German heritage and longstanding brewery culture) is fittingly nicknamed Brew City. Furthermore, Milwaukee belongs to the ten most walkable US cities (with a population of 600,000 or more). It is a show case transformation city: once you have reached the very low, decision makers can only initiate tremendous changes or give up their city (compare 2002 to 2011).

With respect to the city’s architecture, various forms co-exist: vast government buildings (resembling – in my eyes – a combination of Washington D.C. and former East Berlin’s Karl-Marx-Allee), extensive industrial brownfields, converted loft apartments, working class homes, modern office towers etc. Walking through the central city of Milwaukee resembles a walk through the city’s past as well as its dynamic present and a probably more promising future: the city understood that mixed housing would be the key to a revitalization of its downtown area – nothing new, but one could ask over and over again, why so many other cities ignore this option in their policy making.

As I already described in the case of Madison, the natural features can be an important gift to a city. Likewise, Milwaukee has Lake Michigan to its East, and the Milwaukee River running through the city, thus providing the natural setting for the urban renewal alongside the river bank. Creative industries, small start-up companies, and a lively art scene have emerged over the past decade (see here for more information). This was the time when the new building complex of the Milwaukee Museum for Contemporary Art, the Quadracci Pavilion, was opened at the lakefront – a ship-like futuristic icon by star architect Santiago Calatrava.

Now, the ‘Bilbao-Guggenheim’ discussion could come to your mind – or one could question the possible development of the whole lakefront area since modern, high-price/high-rise condominium buildings are constructed. The city struggles with racial segregation, is the fourth-most impoverished big city in the US (in 2009), it has a hard stand against its super-big neighbor Chicago, and it has the common setting of poor outskirts surrounded by rich suburbs nicely placed at Lake Michigan.

But a city does not improve its situation by bemoaning long-time problems. Milwaukee can trust in its nationally high-ranking institutions of higher education (Marquette University, University of Wisconsin, Milwaukee School of Engineering) and observers of the city are positively surprised that mixed housing in vibrant neighborhoods still exist in the near-downtown area (Where else in the US can you find this?!). Together with its eventful history, Milwaukee can base its further development – regardless of the undoubtedly enormous challenges – on a distinct character which has not to be invented (as other cities do).

If we consider both cities, Madison and Milwaukee, we can understand the importance in place branding and management to keep an eye on the second or third row/league of cities. We might find real/original urban jewels that can naturally shine from the inside out. And talking about the tolerant state of Wisconsin could help to readjust our picture of ‘the’ United States.